This year’s Being A Man festival is going ahead 27-29 November. And it looks like a stonker. I’m chairing a panel debate on male characters in film, TV and video games. It’s called Mad Men, X Men and Grand Theft Auto, and it’s on the Saturday at 1230.

I’ll blog about plans in more detail soon—and I have loads of other half-imagined blog posts to write too (sorry I’ve been absent)—but in the meantime here’s the full Being A Man programme 2015.

Here’s what I’ve said about the festival previously.

A lot has changed for me in the last eighteen months. I’ve had to take control of my nose hair and I’ve had way more sex than before. These things may or may not be connected to each other or to the Southbank Centre’s inaugural Being a Man festival, 31 January to 2 February 2014. On Saturday I’m going to a planning session at the Southbank for the next festival, due for November. I blogged about earlier ideas here. In the meantime I thought I’d recap a few things that are not to do with nose hair but ARE to do with blokes and have happened to me since the last Being a Man. END_OF_DOCUMENT_TOKEN_TO_BE_REPLACED 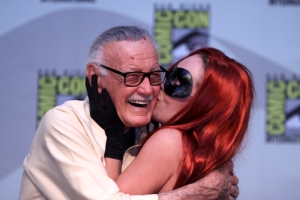 Spider-Man’s real-world dad Stan Lee (left, being kissed) says that Spidey can’t be anything other than white or straight because that’s the way he was born. I understand what he’s saying. The character was created as a straight, white lad from New York called Peter Parker. He’s fought off villains wielding explosive pumpkins and mechanic octo-legs.

He’s got the girl, then lost the girl, then got the girl again. There have even been different girls for him to get and lose and get again. He’s been in comics, films, cartoons and on the side of a million plastic lunchboxes. He’s even had dozens of costume changes over the decades. But there are some things that are fixed: his whiteness and his straightness.

Dear Stan, I say: poo! What are you on about? I thought you had imagination. END_OF_DOCUMENT_TOKEN_TO_BE_REPLACED

Who likes to see the naked gays on Game of Thrones? Is it the straight women watching? Or the straight men? Or the gay men? The latter category is almost definitely a yes. It makes us feel happy because we see gay men in a mainstream show, and they’re naked and having sex with each other. We’re visible that way.

END_OF_DOCUMENT_TOKEN_TO_BE_REPLACED

I thought it couldn’t get much worse than Game of Thrones. I’d just watched an episode in which several other characters were brutally murdered and raped. I was a bit shell shocked as I usually am after watching Game of Thrones.

And then I switched over to Take Me Out. Bloody hell. It’s terrifying. I had been thinking that there’s no way I’d survive as a man in the world of Game of Thrones. I think I’d stand even less of a chance in the world that is Take Me Out. And the scariest thing is that Take Me Out is real. These people actually exist and the thing they do actually happens. END_OF_DOCUMENT_TOKEN_TO_BE_REPLACED

I’m supposed to like Cucumber, this new TV show made for and by queer people. Some viewers have found it distasteful. They say the writers rely on stereotypes of gay people: promiscuous queens, the middle-aged queen who can’t settle down for want of one last danger-fuck, the ashamed ‘straight’ guy who’s all mouth and no trousers.

I bloody love it. Yes there are stereotypes but actually the characters are written and played so authentically that you realise that they came first, before the stereotype. END_OF_DOCUMENT_TOKEN_TO_BE_REPLACED

SPOILER ALERT: look away now if you haven’t seen Cucumber or don’t what know to a few things that happen.

I was far too immature to get into Queer as Folk when it played on TV. I must have been about 15 and all I wanted was the sex and kissing scenes. So I recorded each episode on the VCR in my bedroom and then I’d fast forward through the programme until two guys started to snog, and I’d just watch those bits. I even transferred these clips onto another tape to cut out the drama. The best scenes were in the first episode, when Stuart brings Nathan home from the nightclub. I watched these clips over and over again. I wore the tape out. I can still remember the dialogue. “And the whole football team is there, naked and in shorts, and the coach is going yes, yes, yes…”