Spider-Man’s real-world dad Stan Lee (left, being kissed) says that Spidey can’t be anything other than white or straight because that’s the way he was born. I understand what he’s saying. The character was created as a straight, white lad from New York called Peter Parker. He’s fought off villains wielding explosive pumpkins and mechanic octo-legs.

He’s got the girl, then lost the girl, then got the girl again. There have even been different girls for him to get and lose and get again. He’s been in comics, films, cartoons and on the side of a million plastic lunchboxes. He’s even had dozens of costume changes over the decades. But there are some things that are fixed: his whiteness and his straightness.

Dear Stan, I say: poo! What are you on about? I thought you had imagination.

I thought you knew that people have no bounds. I thought you drew characters who are superhuman as a way of pushing us lowly peeps to dream of different, better futures. You made the X-Men (and X-Women) as an allegory for the civil rights struggle. In the 1960s, you saw how white people were keeping black people down for no valid reason and you knew that everyone has something special about them, which is why you dreamt up loads of different special people (mutants!) and pitched them against the more numerous people who were afraid of them. You showed us fans of comic books and movies that there was nothing to be afraid of the mutants; in fact they were mostly the good guys. Your point was that it doesn’t matter who you are or where you come from. I thought that was your point, right? Your point that has made you millions of dollars!

So why such a lack of imagination when it comes to Spider-Man?

Our beloved Peter Parker stands in a long line of characters from amazing fiction: comics, fantasy, science fiction and more. One of the conventions of this type of literature is characters who change. Doctor Who regenerates every few years or so whenever the actor has raised his profile enough. Batman goes from camp to butch to butch-and-troubled. Spock goes from not-quite-human to not-quite-Vulcan. Peter himself goes from a normal teenage boy to a superhero at the mere bite of a spider. How come our fantastic characters can go through all these kinds of changes but his skin tone can’t even dip a hue? How come it’s inconceivable that Peter only ever fancied girls? (How come Doctor Who can’t be a woman, especially Sandi Toksvig?)

I guess the reason is because these things still matter. It’s sad to realise that, isn’t it? After all the struggle we’ve gone through for non-white people to get their brains and their power recognised, the idea of a white person ‘giving up’ their whiteness is too hard to stomach. That whiffs of racism to me. It means that there’s something about whiteness that needs to be protected. That’s what Stan is saying. If there’s an emotional or ideological reason behind that view, I reckon there’s a commercial reason behind it too. Stan probably believes that there would be uproar if Spider-Man isn’t white any more. In fact, it’s already happening—he’s going to be mixed race and called Miles Morales in the new comics. Has there been a backlash? No doubt. Stan is probably worried about the bottom line and his legacy as Spidey’s daddy.

It’s the same with his straightness. Here’s where there’s even greater flexibility in real life. Most people don’t change their skin tone, but sexuality is often fluid. A lot of people don’t like to hear that, partly because they try really hard to settle their sexuality in one way or another. Many nominally straight people have had feelings for people of the same sex but have pushed them down. Many people who come out from same-sex relationships to have a straight relationship find themselves judged harshly by gay people (there’s a great Radio 4 documentary on these yester-gays and has-bians). But it is possible for a person’s sexuality to change because, well, it happens to loads of people. I’m one of them.

Not for Spider-Man though. Apparently. There’s no way he could be anything other than 100% straight. He may be a gay icon. He may have been the object of many a gay man’s lycra-encased fantasy (“Those buns! Those buns!”) but there’s no way he’d look twice at a bloke. Apparently.

OK, Stan, I get it. Peter Parker is white and he’s straight. He’s a working-class lad with a troubled family background, he’s good at taking photos, he’s a bit of a loner, he just wants to be loved and he just wants to help people. Have these things never been part of a black person’s identity? Or a queer person’s? Exactly. Of course they have. The important thing is not what he is but who he is. That’s why we love little Pete. His fans don’t care about his skin tone. We just want to see our hero kicking ass and being all ethical about it.

To us sensible fans, skin tone and sexuality don’t matter. I think it’s up to Stan and the executives at the comic books and the film studios to show us that it doesn’t matter to them either. As Uncle Ben tells Peter, “With great power comes great responsibility.” It’s time Stan and those other people in control of Pete’s destiny lived up to their responsibility. 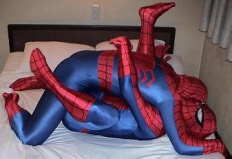